I’m often asked by clients “do my muscles feel tense?”

Usually they are asking about their neck and shoulders. They feel themselves to be very tense, and sometimes they are noticeably rigid, but sometimes, not so much. This kind of muscle tension is intriguing. If you feel tense a lot, it is definitely information to note, especially telling you about your stress levels, or how you might be chronically overdoing it in some way, but it’s not always a 100% reliable indicator of what’s going on in your body (if you want to delve into why – here’s an interesting link).

One of the benefits of learning Alexander Technique is an improvement in this tense muscle feeling, but during a lesson I don’t try and feel if your muscles are tense or not  -or not in way that, say, a masseuse would. In Alexander Technique we talk a lot about muscle tension : so what are we going on about, if not this tense feeling?

Well, it is more to do with the functioning of your body as a whole and how much effort you are putting into moving or maintaining a position.

Let’s take lying down with your legs bent, (semi-supine position) 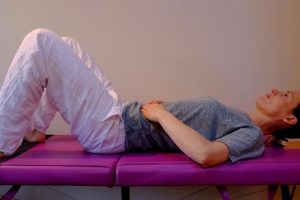 Here, you need the muscles of the legs to work to keep your legs up.

In most people, opposing muscle groups of the legs are both working hard to keep the position. One group of muscles is pushing the legs out, while the other group is pulling the legs in. They are making way more effort than they need in order to maintain even this easy position: the effort of each group of muscles is cancelling the other out. This is called co-contraction – muscles with opposing actions working at the same time.

This is a very common scenario; most of my new students will be using a surprising amount of effort just to lie on the table with their legs up.

Of course, some co-contraction is a necessary part of moving, and holding positions.  Grouping muscles into simple extensors and flexors or adductors and abductors is a simplification. Muscles often have multiple actions and perform a complicated balancing act, working together to achieve what we want to do. But having opposing muscles fighting each-other is just wasted effort. But this extra effort is common in nearly all of us, and is largely unconscious. It becomes our habitual way of doing things, so we take it into everything we do, even those activities that are supposed to teach us how to move better such as yoga. This can slow down your progress in something like dancing or Pilates, or mean you don’t get the full benefit from your chosen exercise.

Opposing muscles shown in red. Co-contraction is when both muscles are active at the same time.

Getting fitter can give you more muscle strength, but you will take your patterns of co contraction into exercise routines too, so that you are ramping up the effort you make. Most of us aren’t athletes and don’t have to perform at a very high level, so it perhaps it doesn’t matter too much if we are doing extra work. However, for most Alexander students, when they reduce that unnecessary effort, they find movement much easier and more pleasurable. And that makes them more likely to move more as a genuinely enjoyable part of life, not a chore.

When an area is painful, we keep it still.  The nervous system tends to discourage movement where there is pain i.e. it “guards” it. This is useful to allow healing, but because pain is sometimes an oversensitive system (see my blog on the weirdness and wonderfulness of pain), this protective response can continue even after an injury has healed.

For instance, if you had injured your shoulder, the muscles and ligaments have likely healed in a few weeks.  Sometimes the pain can linger on after healing, so avoiding moving the area is understandable. But sometimes even after the pain has gone, a protective response has become a “habit”.

This is why physiotherapists will try and get you to mobilise an injury early on, in order to keep mobility. However, we are brilliant at compensating with other parts of the body to avoid movement in the area that is being guarded. Even if you have been shown carefully how to do an exercise this protective guarding will often lead to subtle (or not so subtle!) compensation. E.g. twisting the trunk to achieve an arm movement instead of actually moving the shoulder joint.

Guarding all of you!

This guarding or holding pattern can also be more generalised. For instance, back pain affects nearly everything you do, so it can lead to you guarding your whole trunk and being careful and stiff in your movements.

This is why some back pain sufferers have increased activity of the core muscles. (see why working harder and harder on your core is unhelpful here). People with back pain, or other generalised pain conditions, can put lots of extra effort into very basic tasks. They can also struggle to rest properly because it is hard to switch off, and their muscles are busy even when sitting or lying down. It’s all a bit exhausting.

People who practise Alexander Technique tend to sit upright, and move “correctly”, but not in that forced, tight way you often see in back pain sufferers. It becomes easy to maintain “good posture”, but it isn’t the pretty posture or movement that is important, it is the lack of effort.  One of my clients describes her husband as “liquid” when he lounges on the sofa. His posture is probably what is considered “bad”, but it is the looseness and effortlessness that is probably why he has no pain, while my client is coming to me to learn to be a bit more liquid!

If you aren’t holding hard to maintain a position e.g. sitting at your desk, you are more likely to make lots of small movements. This might just be tipping forward or back a little at the hip joint. Moving frequently means that discomfort is less likely to develop. You still need to take proper breaks, but you won’t have been holding onto a position stiffly for 30 minutes, or have had to fidget to stay comfortable (nothing wrong with a bit of fidgeting mind!).

If you have pain, then reducing this unconscious habitual co-contraction of muscles can be incredibly helpful. When we stop fighting against our own movements everything is a lot easier. It can stop the vicious circle of pain – muscle tension- more pain that many chronic pain sufferers can get into. Alexander Technique is great at the detailed retraining of your nervous system that you need to “switch” off this protective pattern and get you moving smoothly and easily again.

Changing your muscle tension levels is just one aspect of the Alexander Technique that could help you. Would you like to find out more?

Try your first lesson half price or come along to one of my Bodymapping workshops  at The Practice Rooms, Norwich.

Manage Cookie Consent
To provide the best experiences, we use technologies like cookies to store and/or access device information. Consenting to these technologies will allow us to process data such as browsing behaviour or unique IDs on this site. Not consenting or withdrawing consent, may adversely affect certain features and functions.
Manage options Manage services Manage vendors Read more about these purposes
View preferences
{title} {title} {title}
Scroll to Top